Sophie, her college friend Vic, long-time friend Diana, and I met at The Gate in Hammersmith. Sophie and I had a bit of trouble finding the place as there was a show at the Apollo Theater. The line for the show wound around and down several blocks, and covered the set back and rather unassuming entrance to the place with a wide queue of concert-goers. When we finally found our way in we were delighted to catch up with and share a meal with these lovely folks.

They had researched and suggested four possible restaurants in advance for us to choose from. The Gate had miso glazed eggplant on the menu, which is a dish that I absolutely love. I can name the two restaurants (prior to this visit to London) where I have had a memorable rendition of this dish (Kayuga in Ithaca, NY which may not even be there any longer and Wasabi in Asheville, NC and they no longer serve it). So, of course, I chose The Gate as the place to meet.

We each had a starter. Two of us had the miso glazed aubergine, which did not disappoint! The other dishes were a three onion tart and a seared tofu tikka dish with Indian flavors. The latter I tried and enjoyed.

My main was a wild mushroom risotto cake that had a soft inside, but a crispy outside, topped with wild mushrooms and set in a flavorful mushroom puree. It was decorated with arugula. The other dishes were equally delicious sounding and one was especially artful (see largest image below). It was the rotola. The other two were called aubergine schnitzel and red Thai curry. 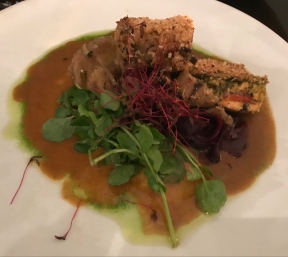 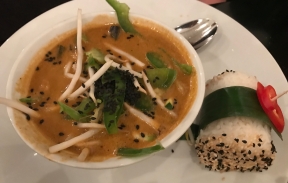 We sat together and told stories for a couple of hours. Vic is especially good at asking conversation prompting questions, so three of us decided to try a dessert.  All but one of the desserts on the menu was vegan or had a vegan option. I hugely approve of restaurants that have vegan desserts beyond sorbet and sweet wines. I had the citrus tart. Yes, I ate the flower and the whole thing was delicious. The other one pictured was the soft cappuccino cheesecake. We enjoyed our desserts with some a small glass of Pedro Ximenex Emilio Hidalgo sherry. Yum. 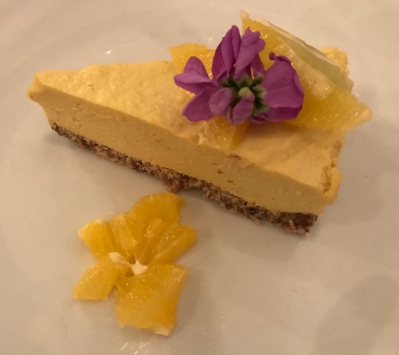 I thought the creativity, taste and execution of this meal rivaled the offerings at Plant, my favorite restaurant at home (it is upscale and all vegan). And that is saying something. I hope to have an opportunity to go back to The Gate while we are here in London.

Join 30 other followers
Follow An American Vegan in London on WordPress.com