Sunday was a more at-home sort of day. Although, I did take a nice long walk which took me through Cleveland Park to West Ealing and back to get some potting soil and little pots in which to repot the culinary herbs that I got from Tesco. They are planted and sold for short term harvest, but I am hoping to save a few of them for a windowsill kitchen garden and an outdoor herb garden. I also discovered these lovely little flowers in the front garden of the flat. Sweet harbingers of early spring.

For dinner we had pasta with marinara sauce made using one of the remaining, PlantPure Starter packs which I had brought with me from North Carolina. If you haven’t checked out PlantPure and their line of starter packs, I highly recommend doing so. These are awesome folks doing ground-breaking work. All of their offerings are 100% plant-based with no added oils. We are big fans of the starter packs (as opposed to the frozen meals), mostly because we love making our own food to our own tastes.With the starter packs, doctoring is easy. I only had 3 left from the set of 20 when we headed over: the potato soup, the marinara sauce, and the tahini dressing. 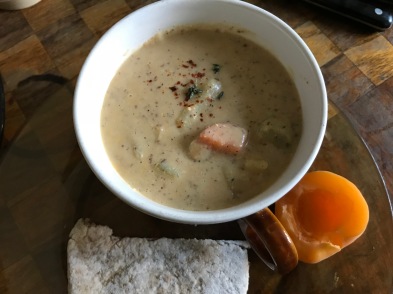 When I made the potato soup, Sophie said she thought it was the best soup I had ever made. Wow! Sadly, it was not completely of my creation, but I agreed with her that it was delicious. It is made creamy by nut flour and a plant-based milk (I used plain soya milk).

On Sunday, we tried the marinara and it, too, was a success. We served the pasta with portabello mushrooms stuffed with spinach.

Sauté onions and garlic in a medium sauce pan with a teaspoon of olive oil or a tablespoon of water for 3 to 4 minutes until they begin to soften. Add baby spinach and soy sauce to hot pan and cook, stirring, until the spinach has wilted. Stir in the vegan cream cheese and pesto, if using, until thoroughly mixed. Add black pepper to taste and salt if needed.

Place mushrooms bottom side up in a small baking pan. Divide the spinach mixture evenly into the two mushroom caps. Sprinkle the tops with crushed peppers or paprika. Bake at 180 degree C for 15 to 20 minutes until top is slightly browned and the mushroom is cooked through.