In the last week or so, we have had the pleasure of two across town adventures that included a visit to a pub. At the first we met Sophie’s college friend Clare and some members of her Real Ale group. In honor of our joining them, they chose an all vegan pub, called the Blacksmith and the Toffeemaker (not far from the Angel tube station). The pub offers only vegan beverages as well and their new line of vegan beers had not yet arrived which was a bit disappointing to the Real Ale regulars.

Nonetheless, the company was great and the food was delicious. I had the green mac-n-cheese with polenta fries and a side salad. Sophie tried the aloo tikki burger with fries. The food was plentiful and came our piping hot. I loved the polenta fries and thoroughly enjoyed the green mac. I forgot to take a picture of of it, but you can imagine it as macaroni noodles tossed with creamy pesto and topped with two colors of vegan cheese and spices (maybe paprika?). Not a dish to eat while watching calories, but a really satisfying version of vegan mac-n-cheese.

Then just a few days ago we went to the London Bridge area to see the Kings College London student production of Euripides’ Medea which was performed in a mix of ancient Greek and English. While there were some lovely things about the production, a talented singing chorus and strong acting, Sophie thought the production our UNC Asheville students pulled off in December was even better. After the play we started wondering around nearby in hopes for finding a bite to eat. The second place we happened upon was a pub called, BunSmiths at the miller. And, lo’ and behold, they had multiple vegan “buns” on the menu. I tried the one at the top of this post (pulled mushroom)  with sweet potato wedges and Sophie had the vegan jerk bun with fries. I thought the filling of my sandwich was scrumptious, but oddly, given the name of the place, that the bun left a little to be desired (a little to soft and squishy…processed white bread-like). 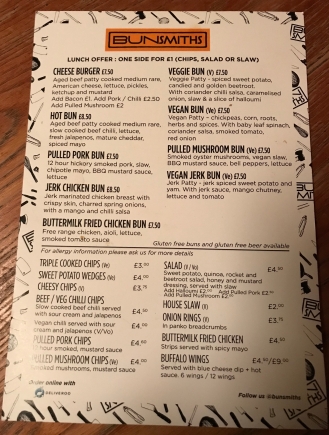 Overall, I am thrilled that it has gotten seemingly SO much easier to find vegan offerings at London eateries, even pubs! If I where to make an wish for the next sea change in London pub offerings, I would ask for more un-fried vegetable (cooked or raw) offerings. Nonetheless, I recommend a visit to both of these places and would be happy to find myself back at either one! 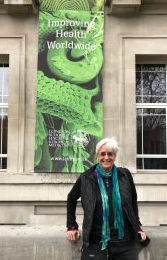