Sophie and I have traveled in Greece a number of times…she is a complete Grecco-phile and delights in a well-crafted Pastitsio. In Greece it is made with ground meat, milk, egg and sometimes also cheese. Not exactly a vegan delight. It is usually a layer of ground meat with tomato sauce, minced vegetables, and spices such as cinnamon and herbs including oregano. This layer is topped with buccatini or penne pasta that has been tossed with egg, milk and sometimes cheese. Then the whole dish is covered with béchamel sauce made usually with butter, flour and milk and flavored nutmeg or mace and black pepper. Moussaka is like Pastitsio, except that thin slices of eggplant replace the pasta–so flavored ground meat, topped with aubergine slices, and then béchamel sauce.

When we first stayed in Greece for a month, we had the opportunity to really investigate the offerings of larger area grocery stores and bio shops (specializing in organic products). One of the items we found (in addition to soya milk) was dried soya mince (what back in the 70’s and 80’s we called textured vegetable protein).

Luckily, Sophie reads ancient Greek and often can make sense of modern Greek so she

sat and worked out the instructions on how to use it. The best part literally translated was “drown in water and then strangle” the mince. I made my first attempt at a vegan moussaka that year in lovely little rental house in Kokkino Horio. It was successful enough that this past summer when we were in Crete, I brought “home” a bag of soya mince. It only made it as far as London. All this to tell about this inexpensive and low-fat product that has a long shelf life and is really pretty darn delicious when reconstituted and flavored well.

Last week I made the dish pictured above. I can be best described as a vegan pastitsio with a layer of roasted eggplant at the bottom, topped with so Fytro soya mince mixed with chopped sweet peppers, onions, and mushrooms and tinned tomatoes flavored with herbs and cinnamon. Then a pasta layer (I used bowties) mixed with a small amount of free-from creamy cheese spread and a spoonful of pesto. I made a vegan béchamel from “pure” brand margarine (I have used olive oil previously), flour, minced garlic and Alpro plain soya milk. I added a salt/shallot/chive spice mix 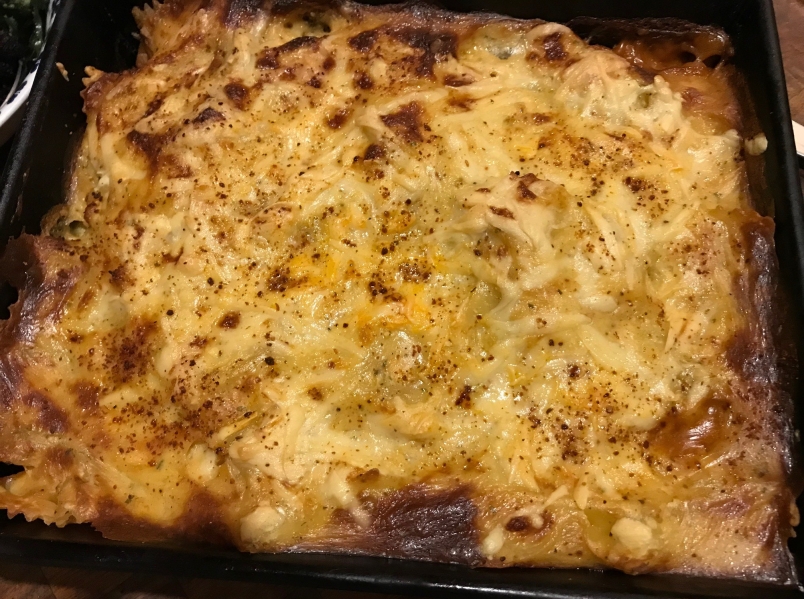 called Fox Point Seasoning (from Penzey’s) and of course, the nutmeg. This was poured over the pasta mixture and finally topped with a bit of grated smoked free from cheese and sprinkled with a smoky paprika. When it came out of the oven it look like this.

We had it with the cutest little purple broccoli I have ever seen. It was bunched into little bouquets and decorated the fruit and vegetable shelves at the Fruit Bowl. It tastes just like broccoli as I know it, but it is a bit tougher (perhaps more sclerenchyma tissue, Dr. Clarke?).

Finally, we finished our meal with a tasty stone fruit crumble (or crisp) as I would call it. I had hoped to make something like the dessert that Clare had made us using puff pastry as a topping (JusRoll brand is vegan!) When I had completed cutting up the fruit I discovered that the pasty in the tiny freezer was no longer viable. Not pictured for a reason. Instead, I threw together a crumb topping using ingredients I had on hand.

3-4 pieces of ripe apricots, peaches, plums, peaches or nectarines (I used 3 apricots and a nectarine)
1 medool or other big date, pitted and chopped
1/4 teaspoon cinnamon

Pit and slice or chop the fruit, leaving skins on, into a small pan. I used a loaf pan. Add chopped date and cinnamon and stir to mix. Then make topping. In a small bowl, combine dry oats, flour, sugar and cinnamon. Add margarine and mix using a fork or clean fingers, until the mixture is crumbly. Spread mixture over the fruit and cook for 20 to 30 minutes in a 160 degree C oven.